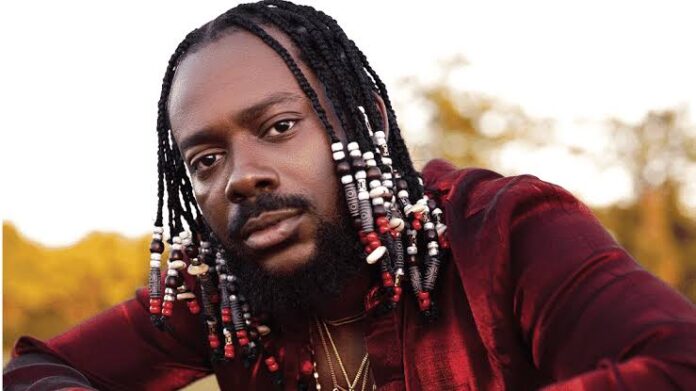 Adekunle Almoruf Kosoko, born January 28, 1987, professionally known as Adekunle Gold or AG Baby, is a Nigerian singer and songwriter. He gained prominence in 2015 after the release of his single “Sade“, a highlife cover of One Direction’s “Story of My Life.”

Adekunle Gold was born into the Kosoko royal family in Lagos State, Southwest Nigeria. He grew up with his parents in Lagos.

He started and concluded his primary and secondary school education in Lagos State under the intensive care of his parents.

Adekunle Gold first became interested in music as a child while listening and drawing inspiration from songs by King Sunny Ade and Ebenezer Obey.

He joined the junior choir at his church when he was a teenager, and at the age of 15, he composed his first song.

After breaking up with a band he had started in school with a mate, Adekunle Gold went solo in 2014.

After sharing an altered photoshop photograph of him hugging Tiwa Savage on social media, he earned the title “King of Photoshop.”

He released “Sade,” a cover of One Direction’s “Story of My Life,” on December 19, 2014. The song received positive reviews and received a nomination for Best Alternative Song at the 2015 Headies.

Following the release of “Sade,” Adekunle, earned a record label deal with YBNL Nation on March 5, 2015.

He released his first official single, “Orente,” via YBNL Nation. He was nominated for Most Promising Act of the Year At the 2015 City People Entertainment Awards.

When it was initially released, Adekunle Gold debut album peaked at #7 for the week of August 13 on the Billboard World Album Chart.

In reference to the atomic number of gold, Adekunle Gold debuted his band “The 79th Element” after leaving YBNL Nation due to the expiration of his contract.

Be was unveiled by Unity Bank as their brand ambassador on January 15, 2018. On August 21, 2020, Adekunle Gold release his eagerly anticipated album, “Afro Pop Vol. 1.“

Adekunle Gold is a popular Nigerian singer and songwriter with an estimated net worth of $2.5 million. The singer has garnered wealth through his music.

In January 2019, Adekunle married Simi in a close-knit wedding after dating for five years.

In May 2020, Simi and Adekunle Gold welcomed their first daughter, Adejare Kosoko.

Adekunle Gold, however, claimed that a friend who rode in the automobile ultimately crashed it. Finally, after fixing the vehicle himself, he sold it for roughly 400,000 naira.